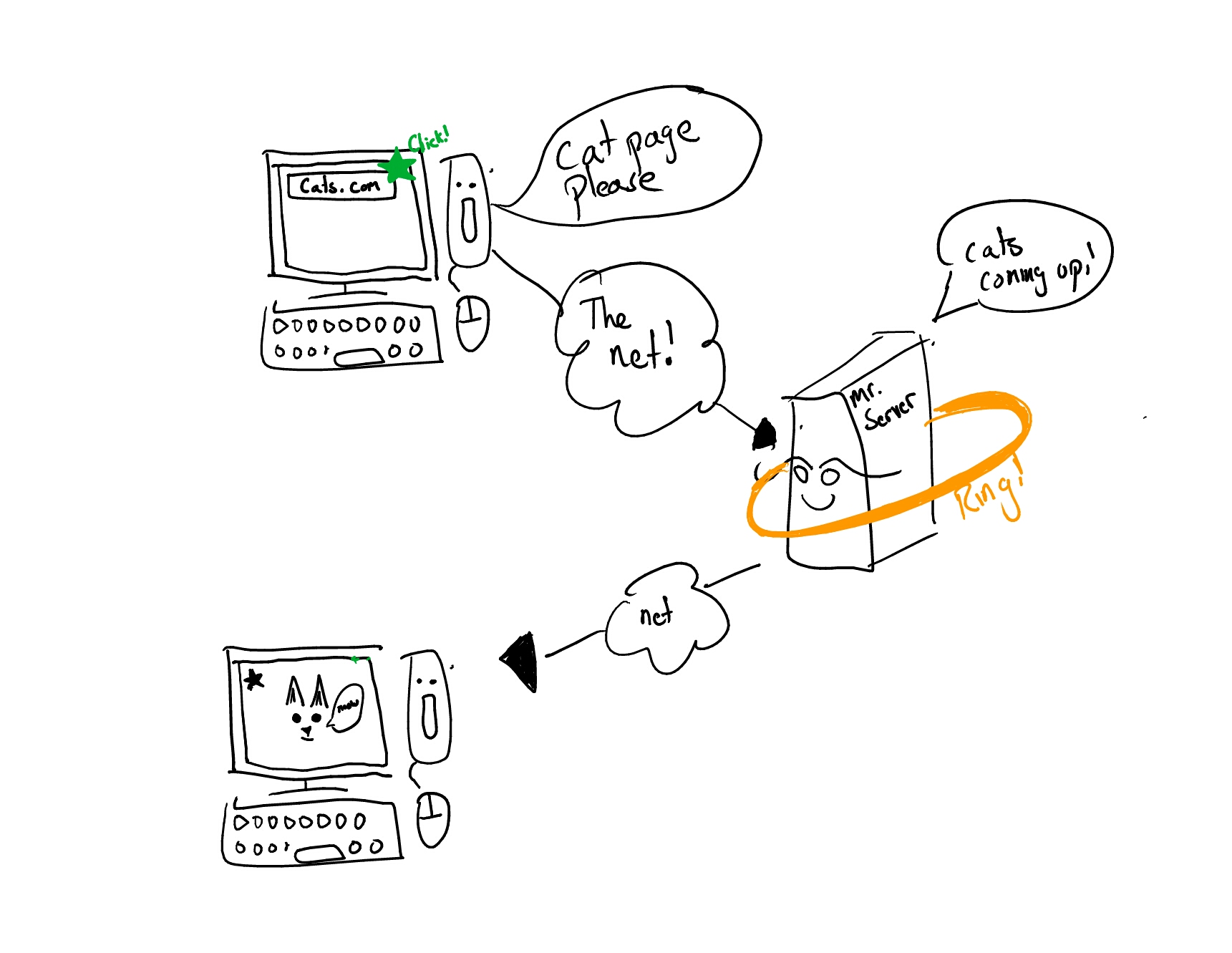 Ring helps your web server deliver cat pictures. end of story. Ok, well maybe there is more. Let's look at some code that sets up Jetty (our web server) that's adapted to used Ring. Keep in mind this means were juggling two concepts that work together. In this case, the Webserver program contains Ring: 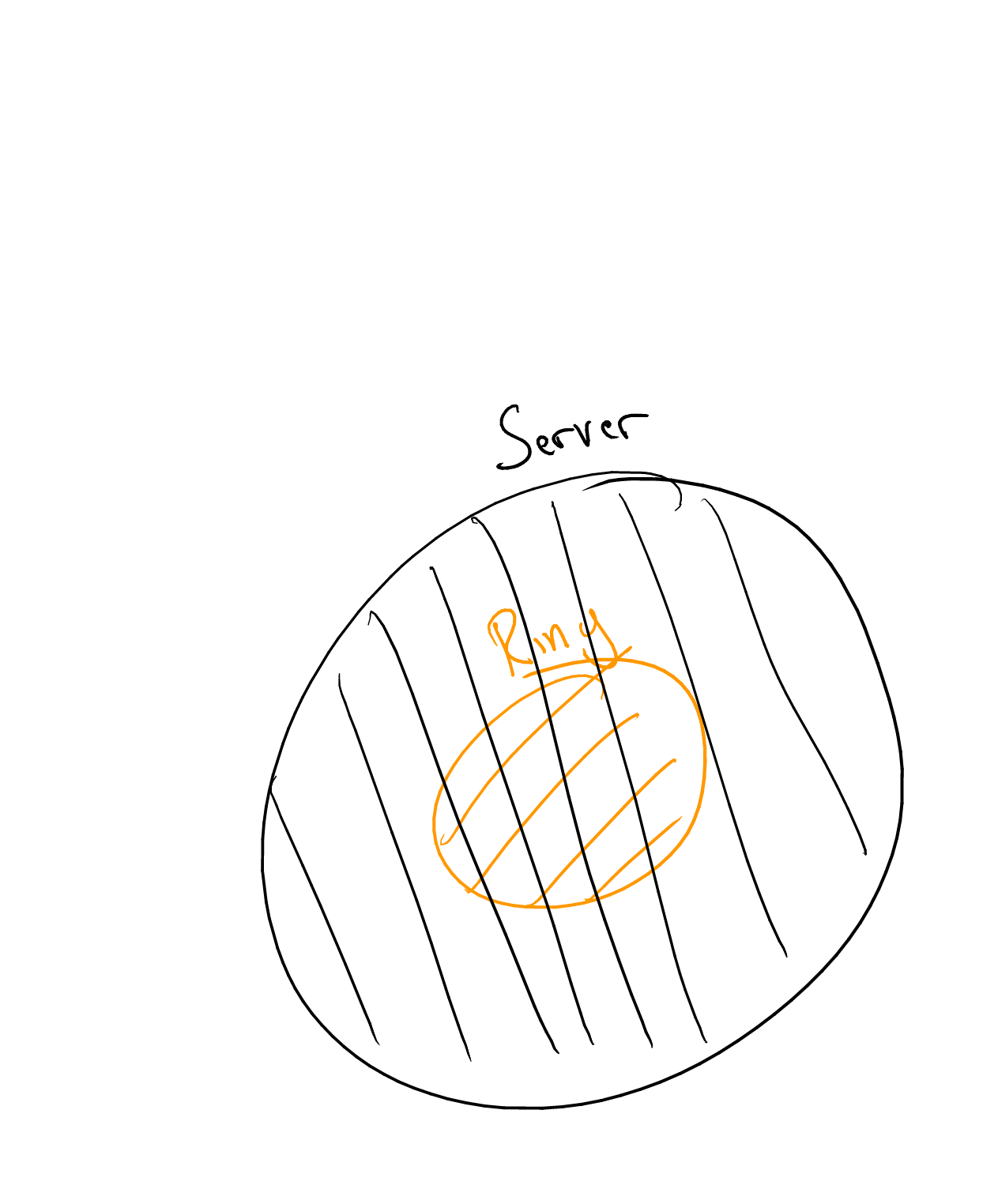 Our first goal is to just display a html page on our local computer. To do that will need to

Running our server is a matter of importing that functionality e.g run-jetty

from the ring library and calling it

well note quite, things get more complex from here. But how always depends on your goals. Let's cover some high level ideas that it's safe to assume you will need regardless. First off, both Rich Hickey and Kote agree that names are important and your likely going to run into these two early and often.

Here is a characterization of the whole webserver process: 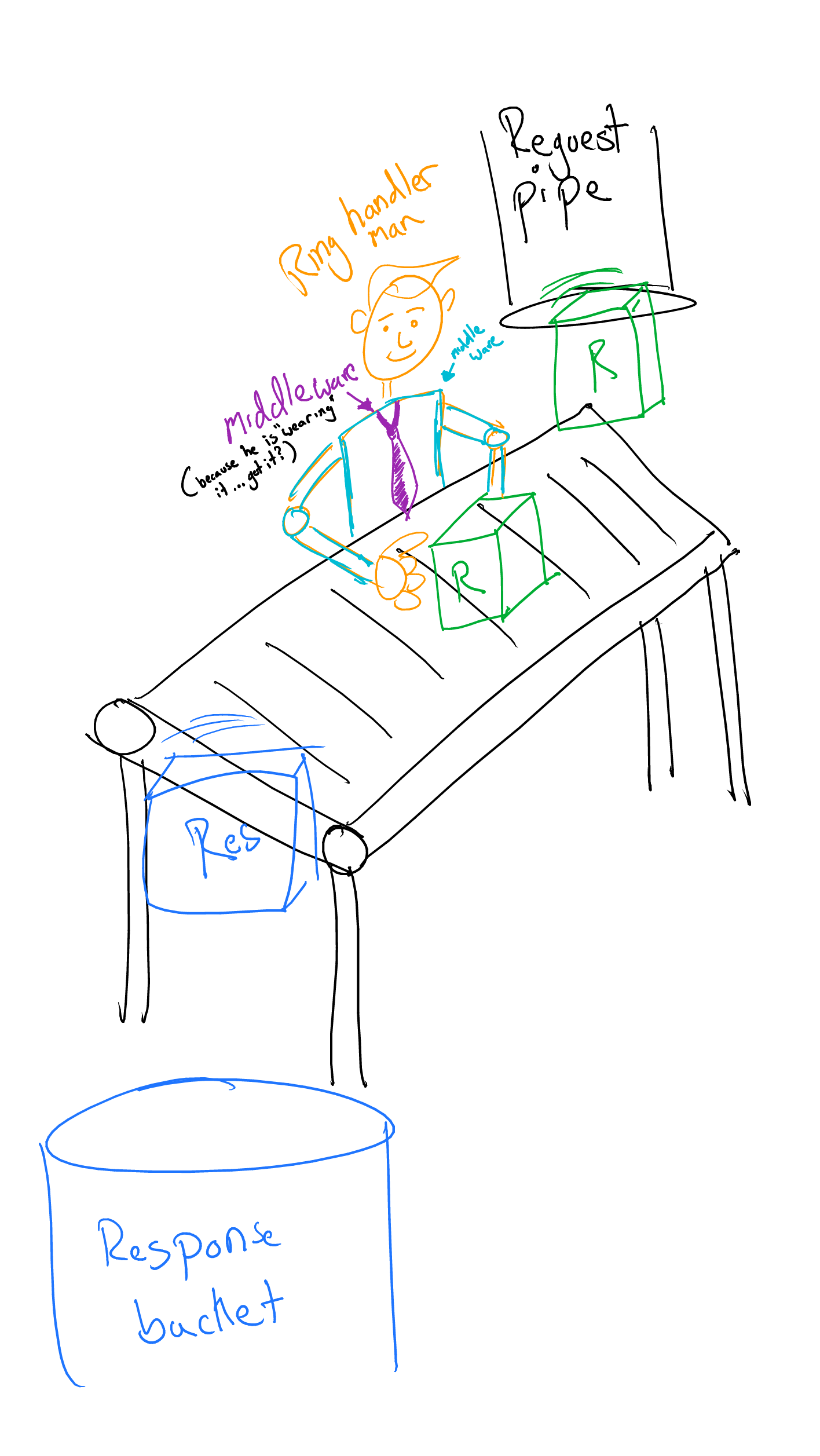 on reflection, middleware would be more like tools to help work on the request, rather then a stylish tie. But hopefully you get the idea.

A ring handler handles requests. We already made one of these

A ring middleware is in the middle... of the ware? Ok, I don't like this name personally. I like "handler-extender". Let's see what I mean, here is our "middleware" function:

That name is long, accurate, and less clear that directly reading the code. Unless that function is getting re-used, I think it should stay anonymous. Like the name implies it takes a handler and returns a handler. That's what middleware does. Here is it in action, reading from the inside out:

That's about as simple as it gets, from there you should read the official docs on both these concepts and more, where they will elaborate on these concepts to deal with more complex situations, but hopefully this laid out the fundamentals in a quick and enjoyable way!

Other resources on Ring

If you are new to Ring and need help setting up an environment here is a great video of how to do that with Calva (which looks great, but I use emacs). If you want to know more about how to handle HTTP requests and how to encode that process in ring middleware then I highly recommend this video on building restful web api.

The goal is to explain Clojure's Ring library with as few words and as many pictures and code examples as possible, as to complementing existing documentation. Also as a way for me to start a discussion around ring and educate myself. In that vein, i'm going to ask questions myself.

"Kote" is from the fantasy series the KingKiller Chronicles.

Questions I had while writing.

It should be clear that I can support myself on my pure artistic talent (sarcasm alert). But in case you need someone to help your team with Clojure full stack webdevelopemt, I'm always looking for my next opportunity.